July 23, 2013 - The Offshore Racing Rule (ORR) recently announced the appointment of a new executive director, Bjorn Johnson of Newport, RI.  Johnson served as Chief Inspector for the Newport Bermuda Race in 2006 and 2008, and Race Chairman in 2010, and he was the Race Director for the Charleston to Bermuda Yacht Race.  Johnson is the Safety and Technical Chairman of the 2015 Trans-Atlantic Race. Read more..
Podium Finishers Determined in 2013 Transpac
By: David McCreary - July 24, 2013 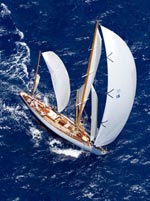 Honolulu, Hawaii – July 22, 2013 – With about one fourth the fleet still making their final approaches into the finish in today’s light winds, the windows of opportunities have now been closed for anyone to challenge the top three overall finishers in the 2013 Transpac. On the strength of starting in perfect wind conditions, carrying these through the race, and with a comprehensive refit and well-developed performance program on a classic yacht, Matt Brooks’ 1929 Sparkman & Stephens-designed 52-foot wooden yawl Dorade has earned overall victory in this 47th edition of the race, organized by the Transpacific YC and held biennially since 1906. Read more..
Old and New Winners Finish Transpac Today
By: David McCreary - July 21, 2013

Honolulu, Hawaii – July 20, 2013 – Over its long history since first being sailed in 1906, the 2225-mile LA-Honolulu Transpac race has attracted a rich diversity of boat types, and among the nine additional entries that today crossed the finish line today at Diamond Head, there were two outstanding examples of the opposite ends of the spectrum in race boat design and build technology. In 1929, the brand-new yacht design firm of Sparkman & Stevens was given a commission to design a fast offshore sailing yacht. Read more..
Lending Club First Boat to Finish in 2013 Transpac
By: David McCreary - July 19, 2013

Honolulu, Hawaii – July 18, 2013 – After a long trip that included a wide range of conditions and a chance at a course record, John
Sangmeister’s Lending Club is the first boat in the fleet to cross the finish line of the 47th Transpac at Diamond Head tonight at 21:52:33 local time, for an elapsed time of 5 days 11 hours 52 minutes 33 seconds over the 2225-mile course. The modified ORMA 73 trimaran was sailed by a crew of nine and was just a few hours from breaking the fully-crewed multihull course record of 5 days 9 hours 18 minutes 26 seconds set in 1997 by the 86-foot catamaran Explorer, due in part to damage sustained from two separate impact incidents that damaged the carbon fiber centerboard on the boat. Read more..
Halfway to Hawaii
By: David McCreary - July 18, 2013

July 17, 2013, San Pedro, CA – In the last 48 hours most of the 58 entries in the 47th biennial LA-Honolulu Transpac are now at the halfway point or beyond on this 2225-mile ocean racing classic that started in three waves last week. The days have gone from cool and overcast to warm and sunny as the teams dry out, relax, and make their final downwind push to the islands. Read more..
Dismasting, Debris & Dazzling Speed in Transpac
By: David McCreary - July 17, 2013

July 15, 2013 -- San Pedro, CA -- It was a glorious day for some teams, but not great for others today in the 2225-mile LA-Honolulu Race organized by the Transpacific YC, or the Transpac.   Earlier today the Transpacific YC received the following report: "At 1830 UTC (1130 PDT) Phaedo dismasted in location 28 58. Read more..
Second Wave to Start Transpac Tomorrow
By: David McCreary - July 15, 2013

July 10, 2013, San Pedro, CA – Another wave of three classes will be setting off into the sunset tomorrow for the second start to the 2013 Transpacifc Yacht Race from Los Angeles to Honolulu, or the Transpac. Twenty-one boats representing Australian, Canada, Japan, and the USA will set off from the start line off Point Fermin in San Pedro at 1300 Pacific Daylight Time for the 2225-mile race to the finish off Diamond Head, just east of Honolulu. Read more..
Transpac Fleet on Their Way
By: David McCreary - July 15, 2013

July 14, 2013, San Pedro, CA – It’s been almost twenty-four hours now since the last wave of boats crossed the start line, so the entire fleet of 58 entries from eight countries are now on the race course of the 47th Transpac, with the next stop Honolulu. For some this has been a fast trip so far, and for others a mix of fast and slow, but at the moment everyone is moving well down the course, in three distinct groups defined by their start date. Read more..
ORR 2013 Regional Championship Racing Series Announced
By: David McCreary - April 4, 2013

FEBRUARY 20, 2013 -- After a well-attended fundraising luncheon held at the Stamford YC on January 12th, 2013 the Sailing Yacht Research Foundation (SYRF) is pleased to announce that it has reached a major milestone in its efforts to solicit funds for its mission to support the science of sailing. Several generous donations received since that lunch have put SYRF past the remaining $25,000 funding goal needed to meet a $100,000 matching challenge grant. Read more..
Peter Reichelsdorfer Hobie Sailor of the Month November, 2012
By: David McCreary - February 13, 2013

For nearly three decades, Peter Reichelsdorfer (Sheboygan, Wis.) has served as an active supporter and leader in the area of offshore ratings on behalf of US Sailing and other organizations. Read more..
ORR 2012 National Champions
By: David McCreary - February 2, 2013

The Offshore Racing Rule and the Offshore Racing Association would like to thank all those who participated in the 2012 ORR East Coast Championship Series. This was the inaugural season for this region. Read more..
Great Lakes ORR Season Trophy 2012
By: David McCreary - January 3, 2013

The Offshore Racing Rule and the Offshore Racing Association would like to thank all those who participated in the 2012 ORR Great Lakes Championship Series. This was the third consecutive offering in this region. Read more..