The Offshore Racing Rule would like to announce the top finishers in the 2014 ORR Great Lakes Series Championship.  Below are the top 20 finishers with final rank, boat name and boat owner. Read more..
Change in 2014 ORR Rule Book
By: Kristina Lee - June 18, 2014

This year the New York Yacht Club is introducing a new division in its Annual Regatta (June 13, 14, and 15) for crews who want to do some relatively relaxed racing under ORR while tuning up for the Newport Bermuda Race. Called the Navigators Division, this new division will race around government marks. Read more..
First Start Date Set for 2015 Transpac
By: David McCreary - May 18, 2014

Los Angeles, May 16, 2014 -- Meeting at Long Beach YC, the Board of Directors of the Transpacific Yacht Club have announced that the first start for the next 2225-mile Transpac race to Honolulu will be Monday, July 13, 2015. Slightly later than usual, this date is timed to allow for better expected winds later in the summer and moonlit skies as the boats approach Honolulu. Read more..
Dreamcatcher wins 2013 ORR East Coast Championship Series
By: David McCreary - March 27, 2014

March 21, 2014 - With less than two weeks to go before Applications for Entry close on April 1st for the 49th Newport Bermuda Race, 161 boats have signed up in a diverse fleet in the race’s five divisions. All entries must have ORR certificates. Read more..
Spirit Walker Wins 2013 ORR Great Lakes Championship Series
By: David McCreary - March 7, 2014 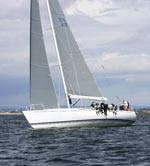 February 6, 2014  - The St. Francis Yacht Club will be using Offshore Racing Rule “ORR” and High Performance Rule “HPR” to score all of the handicap classes for the club’s three main events this year. Read more..