Driven by a desire for apolitical rules that account for wind-speed and course configuration, the U.S.-based ORR family of rules is continuing to be adopted by more sailors this year.

Newport, R.I.—Rating rules based on a Velocity Prediction Program (VPP) aren’t for everyone, but more and more boats are being rated for scoring in 2019 under ORR rules, owned and managed by the Offshore Racing Association. Among the fully measured rules, the well-established ORR rule continues to be the choice for hundreds of boats in top-end 2019 races like the Transpac, Marion to Bermuda, Marblehead to Halifax, and the Mackinac races from Chicago and Bayview yacht clubs.

For boats with owner-declared measurements, the ORR-Ez rule is increasingly filling a gap for other sailors. Through the end of May, 404 ORR-Ez certificates had been issued, and by mid-June, the total will surpass the 420 certificates issued in 2018. 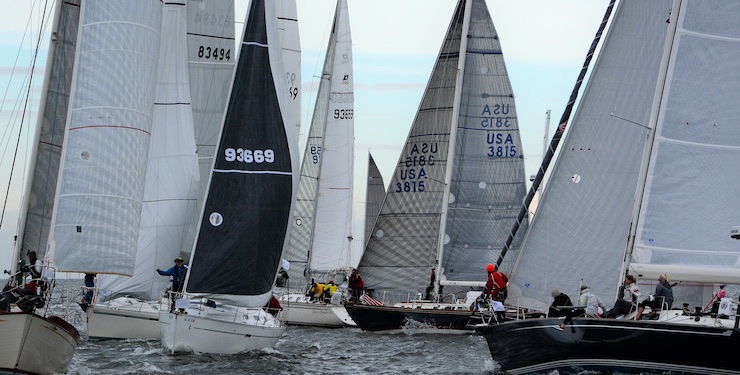 An ORR-Ez fleet sets up for the start of the 2018 Baltimore Harbor Cup. M.L. Gunther photo

On the Gulf Coast, at the Southern Yacht Club in New Orleans, ORR-Ez has been adopted to more fairly handle light-displacement boats such as Melges 32s, 24s and Viper 640s. The club also led an initiative to use the rule in the Gulf Yachting Association Challenge Cup for A and B class boats. To date, nearly 50 boats on the Gulf have received rating certificates.

Bayview Yacht Club has chosen to use ORR-Ez again for short-course entrants in the Bell’s Beer Bayview Mackinac Race. Total certificates issued for area boats to date have climbed from 75 in 2018 to 85 in 2019, and more are expected.

On the Chesapeake Bay, ORR-Ez racing is well-established within the East Coast Racer Cruiser Association, and over Memorial Day weekend represented nearly 30 percent of the generally PHRF-rated fleets in the Down the Bay and Miles River Annual Regattas. One impact of ORR-Ez’s growth is that, for the first time, ORR-Ez will be used in the Annapolis Yacht Club’s upcoming Annapolis to Newport Race for more than 20 percent of the fleet. Given that the international VPP rule, ORC Club, will be used to score other classes in the race, VPP rules will score the majority of the 50-plus-boat fleet.

The Mass. Bay Sailing Association moved much of its racing in 2018 to ORR-Ez, including most of its weekend qualifying regattas, while still providing some PHRF racing. A total of 214 boats obtained 2018 certificates, and according to a year-end survey, most were generally pleased with the cost-benefit analysis of the multi-number system. The season starts late in this region, and as of Memorial Day, 120 boats applied for certificates. The first ORR-Ez regattas get underway in mid-June, and with the introduction of ORR-Ez shorthanded certificates, MBSA is offering a new shorthanded championship for 2019.

Sailors in other areas are testing the waters with ORR-Ez this year, including several in fleets from the East Coast to Southern California.