July 10, 2013, San Pedro, CA – Another wave of three classes will be setting off into the sunset tomorrow for the second start to the 2013 Transpacifc Yacht Race from Los Angeles to Honolulu, or the Transpac. Twenty-one boats representing Australian, Canada, Japan, and the USA will set off from the start line off Point Fermin in San Pedro at 1300 Pacific Daylight Time for the 2225-mile race to the finish off Diamond Head, just east of Honolulu. In all, there are 58 entries from Australia, Canada, Germany, Italy, Japan, Mexico, Thailand, and the USA in this classic biennial ocean race.

The present weather forecast is not encouraging for this group: 5 to 10 knots of west-northwest wind will give them a light start to the race, with even less predicted for the evening and Friday.

But these are not unusual conditions in the long history of this race, so crews are preparing accordingly tonight at their berths in the Long Beach and Los Angeles area. Teams like Alex Farrell’s 1D35 Alpha Puppy in Division 5 were already going light – with only five crew, they are 40% lighter than if they were racing around the buoys – and Zoltan Katinsky’s Farr 40 White Knight has done the same, racing with 6 rather than the usual 10 on their team.

In Division 4 Tim Fuller’s 41-foot J/125 Resolute, is making the long trip with only five on board, half the usual size crew on this type of boat. But the lightest crew in proportion to boat length are the six on board Ivan Macfadyen's 50-foot Funnelweb entry from Australia. They and all the teams may be busy indeed tomorrow evening as the wind lightens and gets variable in speed and direction, requiring extreme focus and no doubt multiple sail changes.

But this may be even more true in Division 6, the so-called 50’s Class, where there are four older-generation Santa Cruz 50’s and five Santa Cruz 52’s who will be duking it out together all the way to Hawaii. Tomorrow’s light and variable winds may see a very interesting tactical race develop rather than an outright drag race more typical of steady conditions.

The favorites among these two boat types are Jack Taylor’s SC 50 Horizon, who has lived up to her name by winning her division in the last few Transpacs, and Bill Guilfoyle’s Prevail, who was the top SC 52 in the 2011 race. But the fastest-rated boat in this class may have an edge in the light conditions: Jeff Urbina’s SC 52 Bodacious IV comes from Lake Michigan, where they are missing this weekend’s annual Chicago-Mackinac Race to race instead to a larger island a lot farther away. 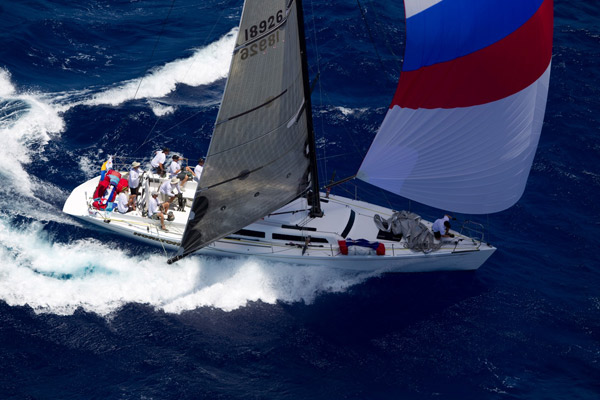 Meanwhile, the 14 yachts in Divisions 7 and 8 who were in the first start on Monday, July 8th are enjoying great conditions and are speeding away from the continent and towards the finish line with a steady NNW wind between 10 and 20 knots. This has allowed many members of this group to approach and exceed 200 miles in 24 hours as their beam reaching is already broadening enough to tempt spinnakers in the leading boats.

These two wood classics are not new to Transpac: Dorade is a Sparkman and Stephens design launched in 1929 and was the winner of the 1936 race, while Westward is a Bill Lapworth design from the 1950’s that is competing in it’s 4th Transpac, having sailed this race three times in the 1960’s. What is the old saying about “like good wine, just getting better with age”?

The final group of 23 boats in Divisions 1. 2, 3 and the Multihull class will start on Saturday, July 11th. This final group consists of the larger racing boats and usually, but not always, produces the coveted Barn Door Trophy winner which is awarded to the first to finish yacht that races without the use of stored energy.

Send-off festivities will be held on the Pine Avenue Pier, next to Gladstone’s Restaurant in Rainbow Harbor, Long Beach beginning at 9 AM each start day. The boats departing will be announced and saluted by fireboats, traditional Polynesian horns and canoes as they parade by the pier and head out to the starting line off Pt. Fermin for their 2225 mile adventure across the Pacific to Honolulu.

The public is invited to come on by and enjoy this unique send-off.

Online spectators may also follow the racer’s progress using the Yellowbrick tracking system which shows all the boat’s positions and information, like speed and course heading, and is updated every 6 hours. Click here to view.

A daily video analysis on the progress of the race will be provided by race veteran and Seahorse Magazine USA editor Dobbs Davis, with online access to the show also on the race website. This show will start soon once the fleets are getting out on the course.

About the Transpac: Organized by the Transpacific Yacht Club, the Transpac is a 2225-mile race from Point Fermin in Los Angeles to Diamond Head, just east of Honolulu, a distance of 2225-miles. With its first running in 1906, this is among the world’s great ocean races, and biennially attracts the world’s most talented offshore sailors and offshore sailing adventurers. For more history and information, visit www.transpacyc.com