For nearly three decades, Peter Reichelsdorfer (Sheboygan, Wis.) has served as an active supporter and leader in the area of offshore ratings on behalf of US Sailing and other organizations.

Peter was a key communicator in his various roles in this aspect of our sport. He facilitated critical negotiations between US Sailing and the ORC regarding ownership of the International Measurement System (IMS) Velocity Prediction Program (VPP). He consistently informed members of developments internationally. Peter has been a huge supporter of the ORR (Offshore Racing Rule) by assisting organizations that provided rule leadership and rule development.

With the Sailing Yacht Research Foundation he helped implement the wind tunnel program to test the effects of heel angle on sail aerodynamics, arranged for the construction of sails, and observed the tests. This was a landmark project that led to a better understanding of the effects of stability on sail boat performance.

Peter was involved in the creation of AMERICAP, served on the committee until 2005 when the name changed to Offshore Racing Rule, and later became ORR Chair. Peter has served as a US Sailing representative to the Offshore Racing Congress since 2006.

He was recognized at the Awards Dinner at US Sailing’s Annual Meeting in San Francisco on November 2.

Here is a list of other positions and roles he has served on over the years: 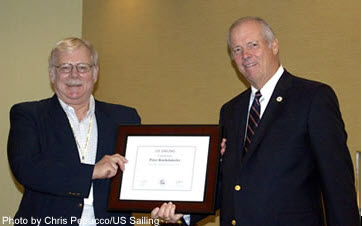