Honolulu, Hawaii – July 18, 2013 – After a long trip that included a wide range of conditions and a chance at a course record, John

Sangmeister’s Lending Club is the first boat in the fleet to cross the finish line of the 47th Transpac at Diamond Head tonight at 21:52:33 local time, for an elapsed time of 5 days 11 hours 52 minutes 33 seconds over the 2225-mile course.

The modified ORMA 73 trimaran was sailed by a crew of nine and was just a few hours from breaking the fully-crewed multihull course record of 5 days 9 hours 18 minutes 26 seconds set in 1997 by the 86-foot catamaran Explorer, due in part to damage sustained from two separate impact incidents that damaged the carbon fiber centerboard on the boat.

“There were at least six major impacts we had with debris out there,” said boat captain Ryan Breymaier. “In all, I think we probably spent about 10 hours working with the damage on the board.”

Breymaier explained that the team had to hoist the board up out of the hull, assess the damage, then re-insert it because the water pressure at high boat speeds could create damage to the trunk. The board was even swapped end-for-end after one large impact, but then that end too was damaged from another impact.

“Despite all these problems, it was still a great race,” said Braymaier, who has been an active offshore multihull racer for several years, most recently in the MOD 70 Class. “These boats are really fast and fun to sail, but the race being slightly lighter than average for us kept the record just out of reach. If we had just a few more knots of wind we would have been here yesterday.”

The next boat on the horizon to the east will be the first monohull to finish, Bob Hayward’s Seastream 650 Manatea in Division 8 who started on Monday, July 8th. They are expected to cross the Diamond Head finish line at just after dawn local time on Friday, July 19th.. 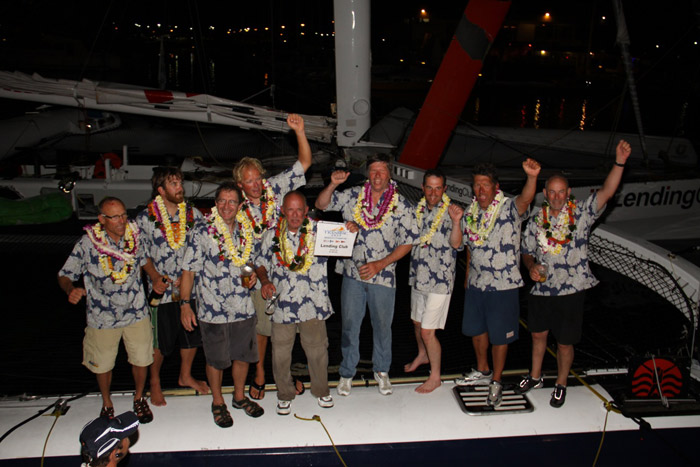 Yellowbrick trackers are reporting positions, speeds and headings on 6 hour delays for the rest of the fleet, which then revert to being available live as they approach within 100 miles of the finish. Online spectators can follow the racer’s progress using this system: click here to view.

And click here to see the current standings reports.

A daily video analysis on the progress of the race will be provided by race veteran and Seahorse Magazine USA editor Dobbs Davis, with online access to the show also on the race website.