July 17, 2013, San Pedro, CA – In the last 48 hours most of the 58 entries in the 47th biennial LA-Honolulu Transpac are now at the halfway point or beyond on this 2225-mile ocean racing classic that started in three waves last week. The days have gone from cool and overcast to warm and sunny as the teams dry out, relax, and make their final downwind push to the islands.

But the navigators remain busy on all the boats, trying to squeeze all the information they can from all their sources to determine how to make their approach. Many, like Andrew Crowe on Syd Fischer's Ragamuffin 100, are using GRIB files downloaded into weather models and routing programs that help them determine various options for this final leg.

And others, like Matt Wachowicz, navigator on Matt Brooks’ classic 1932 S&S-designed wooden-built yawl Dorade, are keeping the old-school traditions alive with use of the sextant, and by submitting his work for review he may be eligible for the coveted Mark Rudiger Navigation Trophy.

But regardless of their methods, of the first wave of starters that left LA in fast conditions on Monday afternoon, July 8th, the largest boat, Bob Hayward’s Seastream 650 Manatea, has been leading the pack boat-for-boat the entire race. They are only 400 miles from the finish at Diamond Head just east of Honolulu, and are averaging about 9 knots as they come into the stronger wind tradewinds east of the archipelago.

Using the ORR rating system, however, the leader of Division 8 in corrected time continues to be Dorade, who is averaging only 0.5 knot slower.

In Division 7, Yuichi Takahashi’s First 40 ten quarter from Japan has taken the lead in a match race they’ve been having with another Japanese entry, Hiroshi Kitada’s X-41 KIHO, now that the two have re-converged after having been separated for the past 48 hours. Ten quarter gybed to the south and found more wind to come back north across the rhumb line and set up close to KIHO, setting the stage for a battle royale over the next 500 miles they have to the finish. 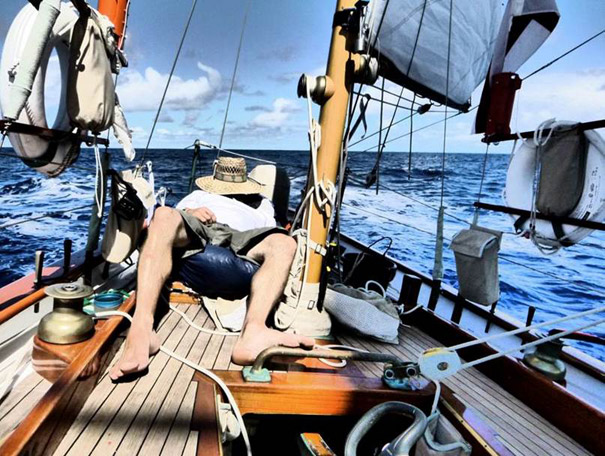 Division 6 is going to be a high-stakes gamble: Jeff Urbina’s Santa Cruz 52 Bodacious IV seems to want to avoid his competitors, steadfastly staying to the south of everyone, perhaps in search of more wind in the dying breeze starting to creep across the course. In contrast, the current corrected time leader and past class winner, Jack Taylor’s Santa Cruz 50 Horizon, is content to work the shifts near the rhumb line and keep covering the rest of the class. We’ll see in the next day or two whether the Bodacious gamble will pay off as they all head more deeply into the Hawaiian tradewinds ahead, with the finish being about 900 miles away.

Division 5 has been led by Gordon Leon’s Farr 40 Foil for some time now, as they play the shifts in a conservative middle-road track about 1000 miles from the finish.

Division 4 is nearly the same, with Chip Megeath’s team on his R/P 45 Criminal Mischief sailing very well and extending on a lead they’ve also had for a few days now, about 750 miles from the finish. And while well-separated now, the two Rogers 46’s, Bob Pethick’s Bretwalda 3 and Chris Hemans’ Varuna 46, might be able to dig back against the Criminals if the breeze goes lighter.

From the second day of the race, the Division 3 ULDB Sleds have been led by Roy Pat Disney’s Andrews 70 Pyewacket, who have been making covering moves against their four rivals with 1100 miles to go. Lately, however, Per Peterson’s Andrews 68 Alchemy have been putting the pressure on the veteran team on Pyewacket, so the next 24 hours will be interesting for this group as they sag well south of rhumb in the search for more wind.

Tonight the lights of Division 2 boats will be interspersed with the Sleds, as these TP 52’s gybe in and around each other in a tightly-packed group. But their leader, Isao Mita’s Beecom, has extended away 50 miles south on their own hunt for more breeze, trying to regain not jus the actual lead but extend even more to the current corrected time leader,Byron Erhardt’s Lucky.

And the waning wind conditions are quickly undermining the Division 1 leaders who were for a time on record pace. With 700 miles to go, Ragamuffin 100 has broken off their earlier match race with Giovanni Soldini’s Volvo 70 Maserati, who has fallen back in the lighter breeze, but at 14 knots of boat speed will make it near impossible to challenge the current course record of 5D 14H 36M 20S held by Alfa Romeo.

The corrected time leader in this class is Tom Holthus’s STP 65 Bad Pak, who has been gybing regularly on the shifts close to the middle road in the course.

But all these monohulls, including Manatea, will have not reached Hawaii before John Sangmeister's modified ORMA 73 Lending Club will get there. The big trimaran sustained impact damage to one of its foils a few days ago, but made repairs and has been off and running fast on their final 500 miles towards the finish. At over 20 knots of boatspeed this is likely to be early tomorrow evening, Hawaii time.

Among all 58 entries, all but one, Meanie, have their Yellowbrick trackers working well and on 6 hour delays, which get turned to live as they reach within 100 miles of the finish. Online spectators can follow the racer’s progress using this system which shows all the boat’s positions and information, like speed and course heading. Click here to view.

And click here to see the current standings reports.

A daily video analysis on the progress of the race will be provided by race veteran and Seahorse Magazine USA editor Dobbs Davis, with online access to the show also on the race website.