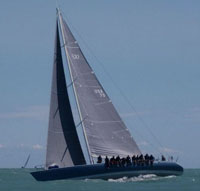 Evolution, a GL70 and well-known boat on the Great Lakes, is owned by experienced sailors Pete Reichelsdorfer and Terry Kohler. Reichelsdorfer, a famed Old Goat, was thrilled to hear about his first place finish in this year’s Great Lakes Championship.

“I’ve sailed the Great Lakes for over half a century, and the thrill of sailing and winning never diminishes. What makes this win sweeter is being part of a movement encouraging racing under the Offshore Racing Rule. With my background in engineering, I appreciate an organization that applies scientific knowledge to developing fair and objective racing.”

ORROA spokesman Frank Kern commented on the range of boats in this season’s series. "Again, we had high participation from competitors in many locations on the Great Lakes. The first four places were won by a broad cross section of yacht designs built from the 1970's all the way to the first decade of the 2000's, demonstrating the robustness of the ORR handicap system. The first place boat, Evolution, is a GL70, the second is a TP52, the third is an Erickson 35 MKII, and the fourth is a North American 40. We believe that the skill of the skippers and crew enabled these boats to come out on top."

This was the third consecutive offering of the ORR Great Lakes Championship Series and the number of entries continues to increase each season. Those who qualified for the series needed a valid 2012 ORR certificate and must have raced in two of the following races, with one of the two being a Mackinac Race: Queen’s Cup, Bayview Mackinac Race, Chicago Yacht Club Race to Mackinac, Little Traverse Yacht Club Annual Regatta, Verve Cup or Bayview Long Distance.

About ORROA:
The Offshore Racing Rule Owners Association (ORROA) was created to promote and encourage offshore racing under the Offshore Racing Rule (ORR) by providing a more scientific, research-based handicapping system. By establishing a fair and accurate handicapping system, the organization encourages participation from a broad group of boat owners, inviting them to become active participants in this new association and championship racing series.