The Offshore Racing Association has revamped and expanded its systems and volunteer and staffing resources, and is set for further growth and development during the 2019 season. It also has increased its capacity for ORR-Ez certificate processing, launching custom software for processors in multiple locations to assist with the spring surge in certificate applications and renewals. More than twice as many ORR-Ez certificates (420) were produced in 2018 compared to 2017, and significant further growth is expected.

A key theme encouraged by the successful introduction of ORR-Ez racing in several parts of the country has been retooling the ORA as a full-service information center for organizing authorities and race committees. The formalized and expanded ORR-Ez Operations Committee now has representation across five geographic regions with more anticipated by spring. According to John Horton, ORA Executive Director, “Committee members are drawn from different regions and are involved hands-on, operationally.”  Several members gathered in the fall for a working session at the first ORR annual conference.

Among other new committees and sub-committees, the Finance Committee, led by 2019 board member Jim Binch, past commodore of the Cruising Club of America, backstops the growing organization, explained visually in the ORA's new organization chart. 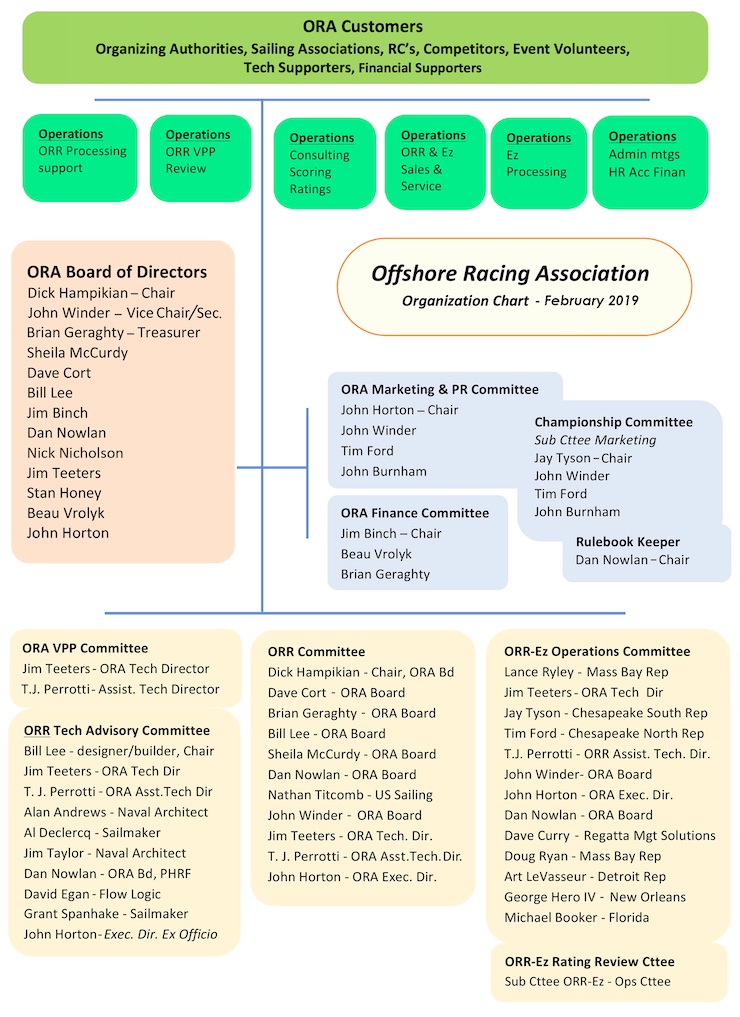 The ORA has also broadened its technical support for its core asset, the non-public velocity prediction program; T.J. Perrotti has come aboard to work on the ORR VPP Committee as Assistant Technical Director, alongside Jim Teeters, Technical Director. Research inputs and review come from the ORR Technical Advisory Committee chaired by Bill Lee, but the VPP coding remains closely held by the VPP Committee.

In the last year, Horton says, technical achievements of the group include ratings for Large Roach Headsails (LRH) as an option of interest to both racer/cruisers and all-out race boats, and further refinement of the ORR-Mh VPP rule, used in the 2018 Newport Bermuda Race and 2019 Transpac.

The ORA annual meeting was held in January, 2019, including the election of Jim Binch as a new member of the board of directors. In addition, board member Dan Nowlan, former US Sailing offshore director, has taken on duties as editor and keeper of the ORA's three rulebooks—ORR, ORR-Ez, and ORR-Mh. And Jay Tyson, ORR-Ez Operations Committee member, is now chairman of the marketing sub-committee on ORA Championships, both ORR and ORR-Ez.

ORR - America's Choice, part 1 of a series Members of Bayview Yacht Club and other Great Lakes clubs...
ORR Permits Outriggers in 2020 on Experimental Basis if Agreed By Race Organizer
By: Jim Teeters - March 25, 2020

The experimental certificate option may be used by only a few boats in one race this year,...
New ORR Class and New Team-Racing Trophies Announced for 2020 Newport to Ensenada Race
By: John Horton - February 23, 2020